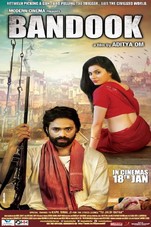 Bandook is the story of nexus between crime & politics and how gun has become an umbilical chord between the two. It traces the journey of Bhola from an ordinary boatman's family to the corridors of power, how he realizes that the ability to pull a trigger is his climbing ladder to respect, acceptability and the ultimate lure... power. The story moves from ordinary village struggles,to inter gang strifes and finally the altar of elected power, the ultimate purifier. The rustic backdrop of the gangetic plain serves as an ideal foil to the story almost becoming a character.We see Bhola's love, friendships all tested in a ruthless world of deceit & violence. The film does not glorify or condemns anything but strives to remain an unbiased observer.