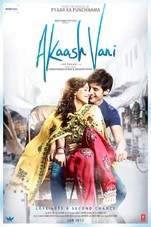 The film starts with Akaash & Vani both setting out on their journey towards a common destination – St. Stephen’s College, Delhi University. It so happens that the moment they meet becomes their life. As they walk towards their first class in the college, they are on their way to share life for the next three years. Vani gives Akaash a calmness and control that he never had. Akaash gives Vani a streak of rebellion she could never think of. And then it happens – as always, for no reason but for the fact that they complete each other - they fall in love. In three years, Akaash & Vani become companions not only in important things of life but also in the most stupid, mundane, irrational parts of each other’s life. But as college ends, they have to separate and when this separation reaches a point where it seems there destiny they are left to struggle to get each other back against the will of family, society and their own dilemmas. The journey of Akaash & Vani’s struggle to find each other once again in the world they first met is – AkaashVani. Vani is a girl who has grown up in Dehradun living by the social norms. She has dreams she wants to fulfill but doesn’t have the courage to stand up to the family or society to fight for them. A simple, girl next door whom you could easily fall in love with, but who never gives you the confidence that she would fight for her love, for you, for herself. Akaash is a charming rebel from Chandigarh who believes in doing his own thing. He doesn’t mind playing a trick or two to achieve it. He hates ‘’Ignore it’ attitude of the society and is more than ready to fight for what he thinks is right. He hates gutless people and can be stubborn to an extent that he would give up on someone whom he loves most but not succumb to the social norms. He’s trying his hand at poetry, plays guitar well, is fun to be with and is exactly the guy whom you would want to fall in love with.

Watch All Videos of Akaash Vani