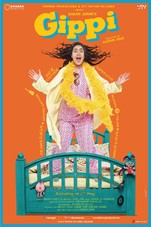 It's time to relive those precious teenage moments! The moments of friendship, the crazy crushes, the best friends and the arch rivals, the embarrassing moments, the effort to adjust to one's changing body! Watch Gippi's journey as she deals with it all. Gippi is a 14-year-old girl who lives in Simla with her mother Pappi and little brother Booboo. She is overweight and awkward and doesn't know how to handle the physical, emotional and social changes adolescence brings. In school she is a backbencher and is constantly bullied by the popular queen-bee Shamira and at home, she's trying to figure out how to deal with living in a broken home. In the middle of all this chaos, she falls madly in love with an older, brooding heartbreaker. When her love story comes to a humiliating end and she is publicly scorned, she decides to take her life in her hands and accepts Shamira's challenge to stand against her in the school elections. Whatever the final outcome might be Gippi makes sure she has a great time in the journey, filling it with delicious desserts, funny teachers, school crushes, and Shammi Kapoor dances. 'Gippi' is a coming-of-age story of an ordinary, overweight girl, who through the course of the film learns to love herself for exactly who she is. It is also a tale of an underdog who picks herself up from nothing and finds herself at the top of her own little world.

Watch All Videos of Gippi

The subtlety appeals, but we wish there was more drama packed in the second half, with a better climax. Teenagers will probably find a slice of their life in Gippi, and adults might protest to such 14-somethings extreme indulgences in fashion, hot-bods and green-tea diets. Overall, a simple story that stays pre-pubescent and doesn't quite grow into the high-school of stories.
Madhureeta Mukherjee, Times Of India - May 10, 2013

The trouble is not so much with the performers but with what they are asked to do in an idiom borrowed from American teen dramas. This comes off as a mini version of the Karan Johar-directed Student Of The Year, which was itself derivative. It's nice for Gippi to be saying what it does. That fat and frumpy is not bad. That it is quite all right to be who you are, and not anyone else. That winning is not everything. But it would have been nicer if it had been said in a newer, fresher way.
Shubhra Gupta, Indian Express - May 10, 2013

For all its attempts to look and feel different from the run-of-the-mill, Gippi is pretty obviously not the ultimate film about adolescence. But there is no denying that it is a warm-hearted film, if nothing else, with some nice touches that might strike an emotional chord. The crucial turning points in the plot are rather unimaginatively handled, often pushing an otherwise commendable effort into all-encompassing shallowness. Gippi is a feel-good drama and everything, even an overdose of clumsy preaching, is fair when the principal pursuit is happiness.
Saibal Chatterjee, NDTV - May 10, 2013

There are minor hiccups in the plot; but Riya Vij’s immaculate work, in a story that is Bollywood's answer to Meg Cabot's Princess Diaries, is commendable. There isn't anything pristine in the film, but it evokes a sense of nostalgia that embeds with its story to leave a salient impact. It deserves a view for Nair's sincerity and Vij's effervescent screen presence!
Mohar Basu, Koimoi.com - May 10, 2013